Hummingbird and the Semantic Web, Now and the Future 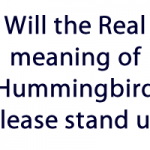 For over five years I’ve been following developments in the semantic web and the technologies that surround it. When Google recently announced the launch of Hummingbird conversations in the search optimization circles was suddenly filled with theories and observations many of which are just plain wrong. Irrespective of whether you consider Google to be the good guys or the bad guys the simple fact is that by introducing Hummingbird to the world, the semantic web has suddenly become mainstream. The reality is though that Hummingbird is just a small piece of a much larger puzzle that affects businesses of all size, in so many respects it’s just the tip of the iceberg. At thebeginning of October I presented a webinar ( see the video below ) that introduced the semantic web and its capabilities to the members of Network Empire. In the webinar I covered many different aspects of the web and how to get the best from it including, the organisations that set down the framework for how the web works, structured and unstructured data plus what companies Google bought and why.  With my co-presenters, Sue Bell and Russell Wright, we also covered the concept of entities, defined what spam is in a semantic age and provided real-world examples of how marketers, using today’s web, could avoid using spam to attract new business. In the short video below I’ve cut various snippets from the full two hour presentation (longer with the Q & A) that will give you a feel for what you missed and the excitement the attendees experienced.  And I just want to point out that using the information one of the attendees learned during this webinar, he was able to close a $20K+ deal just days after the event.   This was the first in a series of webinars leading to a new course for business and website owners who want to implement semantic technologies within their business. If you’d like to find out more please visit www.thesemanticrevolution.com. Enjoy the video. (BTW: Can those of you who might (or would) like to be a guest at the future events get in touch via the usual channels, thx)

Where On The Web